The Test of the Gopis Love

Nav:Home/blog/Gopi Geet – Part 3 – The Test of the Gopis Love 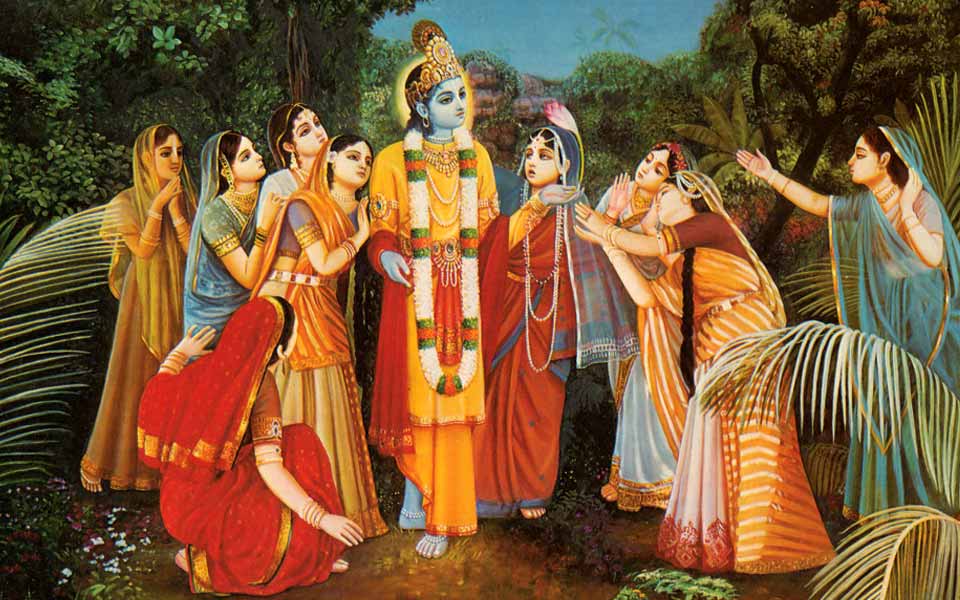 The 10th Canto of Srimad Bhagavatam elucidates the divine passtime of Shree Krishna. Thus the rasik saints have considered 10th Canto as the heart of Srimad Bhagavatam. And the 5 chapters (29 to 33) also known as Raas Panchadhyayi, where the Maharas is described is its soul. Before coming to Maharaas, in the Chapter 22 there is a story of the Gopis worshiping Goddess Katayani to get Shyamsunder (Lord Krishna) as their husband.

One may ask when the Gopis were devotees of Shree Krishna why did they ask Maa Katayani for a boon instead of Shree Krishna himself. Societal rules and traditions are such that it would not be acceptable if the gopis had asked Shyamsundar directly. This is the reason that Mata Sita asked Mata Parvati for Lord Ram as her husband and Rukmani ji asked Maa Jagdamba. In this case Gopis worshiped Maa Katayani. However, from within they were worshipping Shree Krishna, thus Shree Krishna himself assured the Gopis that they will have their desire fulfilled. He granted a boon and said that after one year he will bless the Gopis with the divine bliss during Maharaas.

The Gopis spent the whole year counting days. Even one second was becoming like an era for them.

At last, one year passed and the auspicious night of Sharat Purnima (autumn full moon night) arrived. The night was such that even the divine abodes looked bland in front of it. Shree Krishna with the power of his “yogmaya” created a divine night called “Brahma Raatri” where infinite nights were merged together to give the souls infinite bliss. This most beautiful night was adorned with the brightness of the full moon. All types of fragranceful flowers blossomed everywhere as if it was spring. River Yamuna flowed gently and peacefully, the birds chirped melodiously and the whole atmosphere was blissful and divinely beautiful. Shree Krishna appeared under Kadamb tree in his ever enchanting Tribhangilal form (exclusive pose of Shree Krishna where he is standing bending his body at three points- leg, waist and neck). He adorned his hair with a mor-mukut and is giving sweet glances and smiles. His lips touch the flute and he is playing bewitching musical notes and calling the deserving soul for the Maharaas. He has readied himself for the Maharaas.

Here the question arises how Shree Krishna could engage in Maharaas – God is atmaram or the Supreme soul, he does not need to engage in outward happiness as he is happiness himself. Yet upon seeing the autumn nights scented with blossoming flowers, Shree Krishna created the “desire within” by employing yogmaya shakti and turned his mind towards the loving affairs. The atmaram-param-nishkam God created the desire and engaged in Maharaas to grant Gopis the Divine Bliss and also to savor the same Bliss.

Now, the stage was set for the Maharaas. The “naad” or the musical note from the flute of Shree Krishna was heard only by those Gopis who were the adhikari or the qualified soul for the Maharaas. Gopis on hearing the divine music fell under its spell, and their minds and hearts were instantly pulled towards Shree Krishna. As a result, they went into samadhi or divine rapture each according to the level of their devotion. Some changed their clothing and dressed before running towards Krishna, some hurriedly adjusted their clothes and went and yet others had no consciousness of clothes or dressing and ran toward Shree Krishna just the way they were.

“Welcome O’ Gopis, what can I do to please you, why are you here in the jungle, has some demon entered the Vraj and has chased you away, or have you come here to enjoy the beautiful scenery in the moonlight?” The Gopis were taken aback by such strange questions by Shree Krishna, as he himself had called them by playing his flute.

Shree Krishna didn’t stop there and further suggested them to return back as the jungle is not a safe place for them. The perplexed Gopis did not know how to answer so they stood silent with their heads bowed and the toe scratching the ground. Shree Krishna then said, “I think I understand you must have come here to serve me, but you should not have come, you should have stayed at home and served your husband and children and taken care of your in-laws.” Aggravating the wounds of Gopis, Shree Krishna went on to give a long lecture on the dharm of a lady.

The Gopis finally gathered some courage and answered, “O’ stone hearted beloved, you should not speak in this cruel way. Do not reject us, who have renounced all material enjoyment to serve your lotus feet.” The Gopis further added, “as an expert in religion you have preached us about the duty of a woman, which is to faithfully serve their husbands, children and other relatives.  In principle we agree to this, but as you are the internal friend, relative and the soul of all embodied souls, the service should be rendered to you. So do not reject us and have mercy on us.”

After listening to Gopis, Shri Krishna smiled and said that he was only teasing and testing them. With this statement, Shree Krishna started the Maharaas.  Radha Ji and Shree Krishna seated themselves in the center and the Gopis started dancing all around them in a circle. The Gopis are proficient in all arts like singing and dancing, in fact they are the “maha-shaktis” or divine powers of the Lord himself and all arts are under their direction and control.

The eight companions also known as “astha maha sakhis” are all adorned with every attribute and immense knowledge of all arts and with these attributes they are all worshipping Shree Krishna. Lord Krishna with his powers multiplied his form and it seemed like every Gopi was dancing with Shree Krishna himself.

Amidst the Maharaas a subtle demon called pride sneaked in the mind of Gopis. With the entrance of pride, arrogance dawned in their mind. Each felt that Shree Krishna loved only them and no one else as they were beautiful and accomplished.

Here, again a question arises. The Gopis were divine beings. They were all beyond maya, so how come they came under the influence of maya? Shree Maharaj Ji explains that in the Divine realm, Shree Krishna and his devotees do leelas to please each other or to enhance the divine bliss. So, in order to bring variation in the bliss they pretend to be under maya. Here in this situation, Radha ji first pretended to feel slighted as Shree Krishna was showering all the attention on the Gopis. And the Gopis, in order to give Radha Krishna some private time pretended to be under pride. So, to crush the pride of the Gopis, Shree Krishna disappeared from the Raas Mandal (place where the Maharaas was being performed) along with Radha ji.

God’s love is the highest love of all love. Wonderful narration by Swamiji on Divine love.