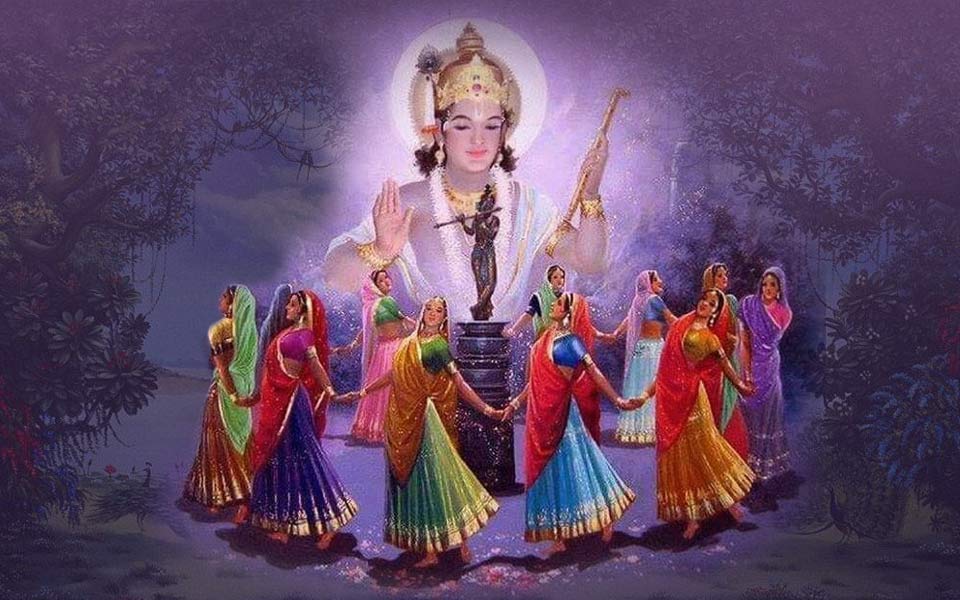 In the last edition, the premise upon which the Gopis begin their song known as Gopi Geet was set. We saw how the Gopis and Radharani pretended to have come under the influence of pride in order to relish the bliss of Maharaas and Shree Krishna also plays part in it by vanishing from the Raas Mandal.

Shree Krishna has two forms in His Madhurya bhav leelas. One is ‘Shringar‘ and the another is ‘Angaar’. In one form, He bestows the sweet bliss of divine love, and in the other form, He makes the Gopis burn in seperation. But one should not forget that both these forms are obtained to give ultimate bliss to the Gopis.

In the beginning, Shree Krishna tests the Gopis before starting the divine dance of Maharaas. One can say that it is the ‘Shringar’ form of Shree Krishna. Later, when the pride penetrates the mind of Gopis, he disappears from the Raas Mandal taking the form of ‘Angaar’. The condition of the Gopis who are suddenly dropped from the state of milan to the state of Viraha is unbearable.  Even in the material world, one who is poor from birth is not as miserable as one who has tasted the fruits of wealth before being bankrupt.

The pain of separation in the heart of Gopis along with Radha Rani burst forth from their lips as a song- Gopi Geet. They start the song by praising the Divine land of Braj and say that it is higher than Vaikuntha. They further add that the importance of the land of Braj has increased because Shree Krishna was born here. Like the association with a great personality elevates the importance of the people around him, similarly Braj has become a hallowed land due to its association with the Lord.

The Gopis said: O beloved, your birth in the land of Braj has made it exceedingly glorious, and thus Indira, the goddess of fortune, always resides here. It is only for your sake that we, your devoted servants, maintain our lives. We have been searching everywhere for you, so please show yourself to us.

The Divine Abode of Vaikuntha

Shree Krishna describes Vaikuntha as his divine and eternal abode, Vaikuntha means without kuntha or blemish. It has no birth or death and no sorrow or sin. Vaishnavs consider Vaikuntha as the most exalted place which everyone aspires to attain but the holy land of Braj is even more exalted than Vaikuntha!

Shyamsundar descended and performed all of his sublime Leela’s in this land of Braj. The land of Braj is filled with numerous celebrations and festivities like Janmashtami, Chathi,  Gopashtami, Govardhan Puja etc. Whereas, Vaikuntha, is associated with the highest attainment which kings and sages aspire to, the attainment of Moksha. God is present in his highest opulence in Vaikuntha. Whereas, the true devotee hankers for God’s human form as that is closer and sweeter in association. It is only in Braj, that one can play with Shyamsundar as a small child, scold him when he is naughty and dance with him in the forests of Braj . This rare divine pleasure can be found only in this holy Braj land.

That is the reason Raskhan ji said:

“I have tried to find Shree Krishna in various leelas, Vedas, prayers, places, but unfortunately, I didn’t find him. At last I tried almost everything and got tired in his search, I had his vision at the lotus feet of Shree Radha Rani, trying to please her.” This divine leela can only be found in Braj hence the importance of Braj far exceeds that of Vaikuntha.

Mahalakshmi was afraid that Lord Vishnu might leave her, hence she requested that they stay together at her father’s home – the Ocean. This way he would never be able to leave her.

Goddess Mahalakshmi rules over Vaikunth and is the master of all wealth and riches. Anyone who desires wealth, must worship her. However, when the same Mahalakshmi who is the Goddess of all the wealth in the universe descends in Braj, she becomes a maid to serve the Lord. She makes the dust of Braj more fertile and soft, she makes the trees more beautiful and the flowers more colorful and fragrant. In this way she serves God eternally in Braj.

Condition of the Gopis in the State of Separation

The Gopis tell Shree Krishna “We have dedicated our heart and soul to you. Yet, we look for you in all four directions and suffer from the pain of your separation. Can you – the one who is all compassionate, not lessen our pain?

For life, death approaches like a tiger but the Gopis’ heart is full of the fire of love. Hence, death cannot approach them. There is yet another reason – the Gopis have surrendered their life force to the Almighty Lord. Hence when Yama – the God of Death, approaches, he finds that their body is lacking the life force he retreats.

This is the condition of the Gopis, that they do not fear death. Rather, their only concern is that if they die, Shree Krishna will be hurt by their death.

Seeking the Lord, who has vanished from the Maharaas, the gopis justify “O’ Shyamsundar! Give darshan (vision) to your beloved Gopis, so that the outside world should not blemish your devotion.”