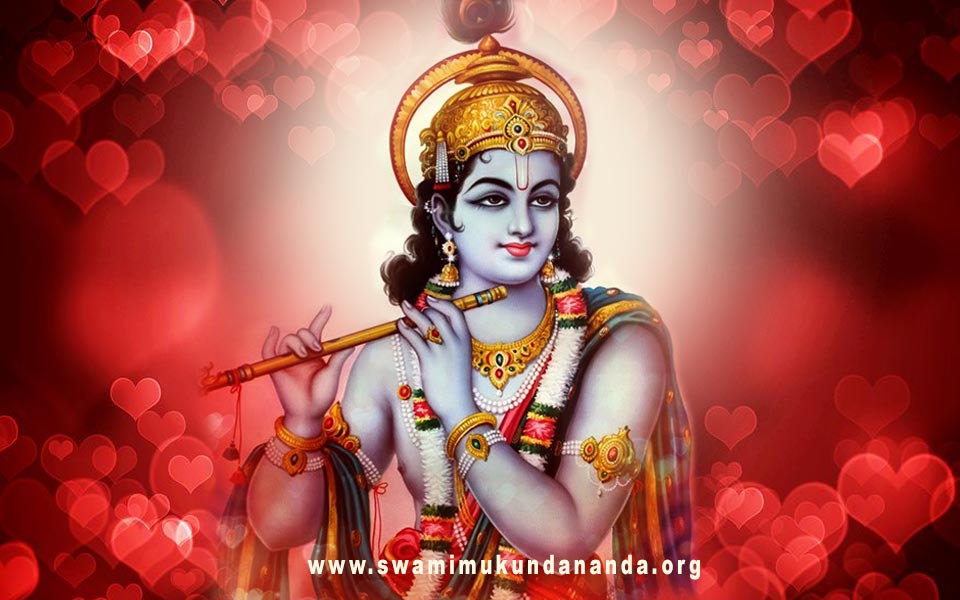 In the previous edition, we saw how the Gopis praised the land of Braj; it had surmounted the Divine Abode of Vaikunth itself. We also saw that the Gopis yearned for Shree Krishna so much that their pran vayu (vital air) was ready to depart. However, they were alive, for they did not want Krishna Bhakti to be tainted. Now that Shree Krishna has left, the Gopis are in such a state that sometimes they feel that Krishna is not with them. They experience the immense pain of separation. And sometimes they feel that he is standing right in front of them. In this manner, the bhav (sentiments) keep changing from time to time. Right now, they feel that Krishna is with them. And they say:

“O master of our hearts, we are your unpaid servants. O beloved, fulfiller of all our desires, is it right on your part to kill us with the strikes of your divine eyes which are even more beautiful than the lotus petals of a clean autumn lake?”

Currently, the Gopis are experiencing the ‘milan bhav‘ (sentiment of union) with Shree Krishna. They are perceiving him to be standing in front of their eyes. In that deep love, they are now describing the eyes of Shree Krishna. We have often heard “The eyes are the windows of the soul.” It is very correct because our tongue might lie but our eyes cannot. What is in a person’s heart can be known by simply looking into his or her eyes.

Even in this material world one can find many people with beautiful eyes. World literature is also full of odes on the eyes. People compare their beloved’s beautiful eyes with exquisite objects like lotus, some compare them with the eyes of deer and some with the fish. In the divine realm also, the devotees while eulogizing the beauty of the Lord, have given many names like Kamal Nayan, Chandra Rupa, Kamakshi, Rajeev Lochan, Ravi Lochan, Padmahastha, etc.

Now, what to talk of the beauty of Lord Krishna whose beauty is the Supreme among all. Kamdev is considered to be the most attractive god, but even the same Kamdev is attracted by the beauty of Shree Krishna.  Thus we call him by the name of `Madan Mohan” which means the one who mesmerises Madan (another name of Kamdev).  Just imagine the beauty of Lord Krishna, his mesmerising eyes, his smile, his posture, his gesture, everything about Lord Krishna is bliss personified. His eyes are perfectly curved and pointed. It is through those eyes that He bestows divine love on the eligible souls. He wounds his devotee’s hearts with those very eyes. That is why the devotees warn the world to be careful of Shyam Sundar’s eyes!

“The eyes of Krishna are not just large but they are sharp and pointed. He makes them such so that his eyes may incessantly pierce the hearts of his devotees. ”

“O people, do not walk through that lane.” Why? Is there a roadblock, terrorist attack, what is the matter? “No, no on that road stands a little boy with a bluish hue.” So, is he dangerous? Does he have weapons? “Not really, he has placed his hands on his hips and he is standing there.” Then what is the matter?  Why should we not go? “I warn you because once, my eyes met with his, and ever since then I have become his servant. So, if you wish to enjoy the world,  do not travel through that road!”

The Gopis are now applying an allegation on Shree Krishna. They say, “You are a thief!” Shree Krishna is completely taken aback by shock. He says, “Oh my dear Gopis, what sort of an allegation is this? What have I stolen?” Answering him, the Gopis say, “You see, there are various kinds of thieves. Some thieves steal only on special occasions – say there is a Holi celebration or somebody’s wedding, these thieves merge into the crowd, steal little things and get away with it. And then there are those who are experts in the robbery. Such people rob on a daily basis. It is their very profession. And you are such an eminent thief!”

Nandkumar is bewildered by such degrading statements, that too by the Gopis who love him more than they love themselves. He says, “What have I robbed of yours? How can you speak such harsh words? Do you have any evidence?” The Gopis smile slyly and continue, “Hear more about your exquisite robbery skills! There are those thieves who follow principles such as not robbing from pious places such as temples. But you do not have any such principle. Every day, you go by the lakeside,  and in spite of the lotuses being surrounded by water on all four sides, you get into the water, and you steal the beauty of the lotus petals and make them a part of your eyes! O Manmohan, do not commit such a discretion. This is a huge sin!”

Here, we need to understand that God can never incur sin. This Shree Krishna knows and so do the Gopis. But whatever they are saying is coming from a place of love for Krishna. They are teasing him simply to increase the sweetness and the bliss of divine love.

The Gopis now move on to the root cause of the entire incident. They say, “You were the one who looked at us with painful eyes. You called upon us to serve you.” Krishna replies, “But you were the ones who had observed a fast of Katyayeni Devi for attaining me. Who asked you to fast, the fault is on your side.” The Gopis agreed and told him that yes they had fasted but at the end of the fast, it was he who had given them the boon that he would meet them and provide them with the bliss of union. Now the Gopis plead to him by saying, “Do not do such a hideous act. It was you who slaughtered us with the arrows of your most gracious eyes and now you have left us alone! O beloved Krishna, please come back. We are your unpaid servants. You haven’t given us anything and nor do we want anything. Yet we are ready to serve you. Please come back.”

You might have noticed that the sentiment has again changed into longing for Krishna. The Gopis are in deep pain. In the beginning, we had seen that the Gopis were overcome by pride. Hence, they said,”We are yours!” Now that Krishna has left them, they have again adopted humility. Now the only sentiment is ‘You are ours, and we are your servants!” What happens next? Does Shyam Sundar listen to their plea so easily?  We shall find that out in the next part.