Shree Krishna as the Supreme God 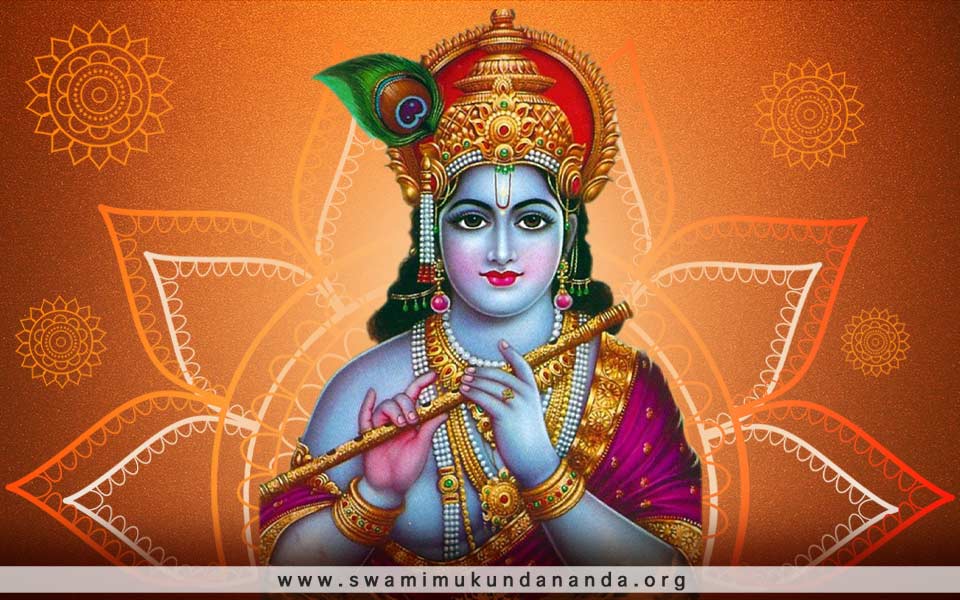 Amidst the Raasleela, when Shree Krishna noticed that pride had crept in, He retreated from the hearts of the Gopis. They began to experience the inconceivable pain of separation from their Priyatam and set out to search for their beloved in the dense forest. Entreating the trees, the leaves, and the stones on their path to guide them in the direction of their Shyamsundar, the Gopis came across Radharani. The Gopis expressed their wretched condition and pleaded Her to help them. Discerning this situation, Radharani encouraged Her Sakhis (girlfriends) to sing a song with Her. This song is famously known as Gopi Geet – a brilliantly distinguished love song of the highest excellence and also the most elevated song of Viraha Prem (sentiment of separation in love).

Shree Krishna is often referred to as Gopikanandan, the son of Yasoda and Nandbaba when Bhagawan incarnated as Shree Krishna in Dwapara Yuga. One day, Krishna and Balram, at a very tender age, were arguing over which parent loved whom the most. They began hugging and jumping on Yasoda and Nandbaba’s lap repeatedly to claim their love for Krishna-Balram the most. When this debate continued for a while, maiya and baba, being elderly, got tired of Krishna-Balram’s amusement. Instead, Nandababa implored Krishna and Balram to challenge one another by standing on one leg, closing their eyes, and singing songs. Krishna and Balram began to do so eagerly and energetically.

As the Gopis continue to recount various reasons to Shree Krishna to soothe their intense pain and reveal Himself to them, they continue as follows:

“You are not just the son of Yashoda but the divine Lord Himself who resides in the heart of all beings. O eternal companion! In response to the prayer of Brahma, you have incarnated as a scion of the Yadu clan, to protect the world.”

The Gopis substantiate their belief in Shree Krishna being the Supreme Lord by positing three rationales.

Using these arguments, the Gopis ardently appeal to their beloved Lord to take notice of their devastating conditions in the viraha bhaav. In the material world, it can be closely compared to a drowning person struggling for one last gasp of breath before death. They plead Him to grant His madhurya-swaroopa darshan (Divine vision of sweet-loving form) for the sake of protecting the lives of His devotees, which is one of His reasons for appearing on this planet.

In the Raasleela, there are two kinds of Gopis participating in the divine dance of enrapturement and blissfulness – the ones who knew Shree Krishna to be the Supreme God and the others who were simply charmed by His shad-aishwarya (six-divine-virtues) but were not aware of Him being God. In Bhagavad Gita, Shree Krishna enlightens Arjuna by revealing that whoever worships His Personal Form with undivided devotion, attains Him. Bhakti for the Supreme God must be learned from the maidens in Braj. Narad Ji in his Bhakti Sutra says:

Our love for Shree Krishna should be -“Just like it is seen in maidens of Braj.”

Both knowingly and unknowingly, the Gopikas were attracted to Shree Krishna. They only persevered to make Shree Krishna happy, they always talked and discussed Him with one another and they yearned to be in Shree Krishna’s presence every nano-second.

Shree Krishna is Sachid-ananda-rupa who bestows divine knowledge, divine bliss, and divine love to His bhakt when they devote themselves wholly by surrendering their mann, buddhi, chitta, ahankar at His kamal-paad (lotus feet). It is highly imperative to note that bhakti is the mother of knowledge and is independent of gyan. In Shreemad Bhagavatam, knowledge is personified as Bhaktidevi’s son. Knowledge enables a soul to elevate to the highest platform where Divine Love exists in its truest and purest sense.

The main purpose of the incessant cycles of life and death hinges upon learning to inculcate love for the Supreme God. When a soul learns to love Shree Krishna so dearly that it forgets its beloved to be God and treats Him like its own child or close friend; Shree Krishna takes pleasure in such love more fondly than those who consider Him as God and keeps him separate from themselves.

The essence of divine knowledge lies in realizing our true relationship with God. In response to Shree Sanatana Goswami’s “Who am I?” query, Sri Chaitanya Mahaprabhu reveals:

“The constitutional position of all living entities is to be an eternal servant of Shree Krishna.”

There are two worlds – the spiritual world and the material world. Jeev-atma or a soul belongs in the margin of these two worlds. Hence, all living souls are related to Shree Krishna as one and simultaneously different. Since we are spirit souls, we are one in quality with the Supreme God but at the same time different from Him. Therefore, in order to rise to the platform of divine love, we must continually strive to please our Lord by serving at His lotus feet without yearning for any desire. Once this practice is perfected, Shree Krishna graces such souls by settling inside their hearts; and the soul also roams around freely inside Him forever.

Very beautiful discuss about Gopi Krishna ,!! Gopi who were the highest form of Bhakti ! Thank you Swamiji Radhey Radhey !!!

So beautifully explained by Swamiji