Happiness Is an Attitude – Choose to Be Happy

Day 2 Happiness Challenge: Choose to be happy right now—make a conscious decision that my attitude towards happiness is my choice and I will always choose to remain happy within.  How did you feel after making that choice?  Try repeating this thought every day and share your experiences with us. 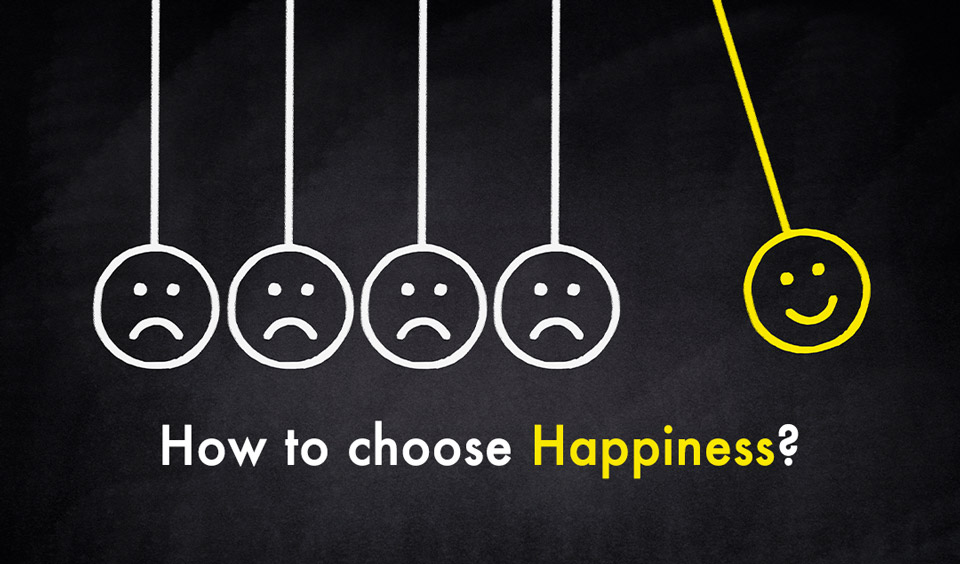 What objects do we need to possess to become happy?  Actually, nothing at all!  All we need to do is—to come in touch with the fountain source of happiness that is already within ourselves.  While learning the art of happiness, let us understand the fact that our happiness does not need to depend upon the existence of external objects or possessions.

Consider an ancient story.  There was once a King who was walking on the terrace of his palace.  He was lost in miserable thoughts about the friction with his queen, the indiscipline of his prince, and the rebellion by his commander-in-chief.  Suddenly, at that moment he heard sounds of mirth and laughter coming from the hut of a poor family that was just by the side of his palace.

The King was astonished, “I, the King of the land is unhappy, but this poor family is so joyous and blissful!”  So, he called his minister and said, “Minister, can you please tell me what the secret of this poor family’s happiness is?”  The minister said, “O King, if you wish to know such a priceless gem of wisdom, it will cost you 99 gold coins.”  When the minister got the coins, he tied them into a bundle and threw the bundle in front of that hut.

In the morning, when that family woke up, they opened their door to discover a bundle before their doorstep.  They were thrilled to see the gold coins—”How much have we received? Let us count it.”  There were 99 coins.  Now, they thought, “If God had to give us, He should have given a hundred straight.  How can we be happy in 99 now?”  They lost their happiness.  They decided, “God has given us only 99.  Never mind.  We will purchase the hundredth gold coin ourselves.”

They set up a saving scheme and started living by it.  But the day the saving was not as planned, a quarrel would begin at home.  The husband would blame the wife, “You have spent too much”.  The wife would blame the husband, “You did not earn enough today.”  Slowly, the peace at home started vanishing.

One month later, the King was again walking on his terrace, when from the same hut, sounds of fighting and quarrel came to him.  He was surprised and thought, “What happened to this family?”  So, he called the minister, and said, “Minister, what is the matter?  What has happened to them?”  The minister said, “This family has fallen into the trap of 99.”  They are thinking, what they have today is not enough to be happy because they only have 99.

In the same way, we too have fallen in the same trap.  We have this body, education, two rotis (bread) to eat, and two sets of clothes to wear.  But this whole rat race is because we think, “What I have is not enough.  It is only 99.  If only I could get my hundredth gold coin, I would definitely be happy.”

So, everybody is thinking, happiness is in the next class.  Everybody is thinking that the grass is greener on the other side.  Nobody is realizing that happiness is not a destination that we will reach one day.  If that is our theory, then the whole journey of our life will be passed in anticipation of future happiness.  And what is the guarantee that when we become old, we will become happy?

The Indian English writer, Ruskin Bond, put it very well when he said, “There are only two disappointments in life, to seek something and not get it, and to seek something and get it.”  That is why to wait for a future destination of happiness to be reached is great folly.  We have to make every day, every hour and every moment of our journey—a happy one.  And how do we do that?  Very simple.  Decouple our experience of happiness from the necessity of external objects.  Let us decide — “If I choose to be contented in what I have, I can be happy right now.”  In other words, happiness is not an external object.  It is a choice of attitudes that we make.  Choose happiness again and again.

This is the message and tool that we need to start practicing on the second day of our Happiness Challenge.  Also, let us retain the tool that we had discussed on day one.  Let us move forward on this journey of happiness and mastering how to live in happiness every moment of our life and spread happiness to all those around us as well.