Make the Right Choices in Life 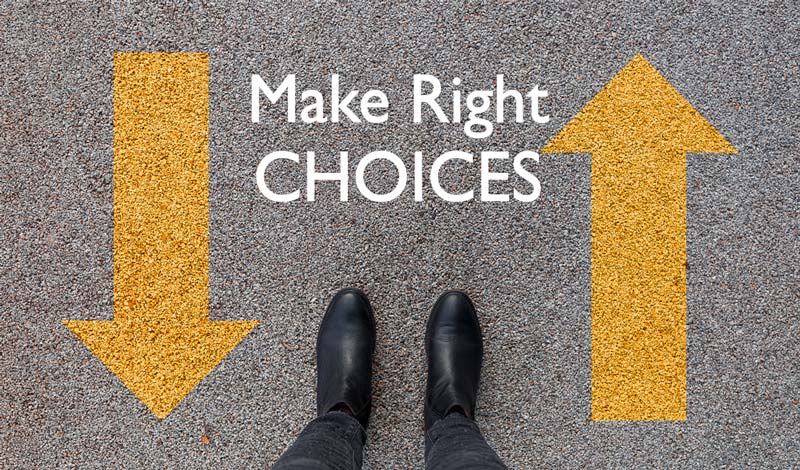 Life always presents us with a variety of options from which we can choose.  If we make the right choices, it leads to success, fulfillment, and happiness.  The wrong choices lead to misery, failure, and gloom.  As we progress in mastering the art of happiness on the ninth day of the Happiness Challenge, let us talk about the importance of the choices that we are making consciously or unconsciously in our life.

A few hundred years ago, a saint called Goswami Tulsidas lived in India.  He is famous as the writer of the Hindi Ramayana.  However, in his youth, he was not saintly at all, rather, he was quite a Casanova.  He was very infatuated with his wife.   One night his wife had gone to live with her parents when Tulsidas realized, he just could not stay without her and started off from his place to meet her.  But since it was a stormy night, there was no boat willing to take him across the river.  He found a log that he held onto and swam across and then found a rope hanging from the wall, which he grabbed and climbed up to jump through the window into his wife’s room.

He thought that his wife would be pleased to meet him.  But she was aghast and scolded him for doing such a nasty thing.  She said, “In your infatuation for me, you did not realize that was a dead body which you mistook for a log and that was a snake that you assumed to be a rope!  Instead, the amount of love that you have for me, if you had a fraction of it for the Supreme Lord—Shri Ram, you would have achieved God realization by now.”

That scolding Tulsidas received from his wife was a wake-up call for him.  At that moment he decided that no longer would he allow his mind to remain in such a degraded state.  Rather, he decided to take action by turning inward.  He engaged in spiritual practice and devotion and transformed himself to the great Goswami Tulsidas.  Thus, that one choice he made on that particular night had such a big impact on his life.

Think about our own life—where were we fifteen years ago?  We had then made choices to either study engineering or medicine or accountancy or law, and to get married or not to get married.  And these choices brought us to the situation in which we find ourselves at present in life.  Today as well, we have choices that we can make—some of these choices will be reversible, some will not be reversible.

Consider an anecdote.  Jerry Lewis, the comedian shared that—when he used to become frustrated with his marriage, he would take out the movie of his marriage and played in reverse.  When he would see himself getting out of marriage, he would feel liberated.  He realized that this was a choice he had made from which it was not easy to extract himself.  Nevertheless, he chose to laugh at his situation.  He could have chosen differently—to explain to his wife or to fight with her or to file for divorce.

So, in the same way, the choices that we make have short-term or long-term consequences.  Will today be the day, when we will decide to choose wisely and transform our life, like Tulsidas did?  We may say, “Is life transformation so easy that it is the consequence of a single choice?”  Of course, it is absolutely not so; rather, alongside with the choice is the intensity of the decision.

Consider these examples.  There is one decision a person makes to give up smoking, and then starts again at night.  And there was one decision that Mahatma Gandhi made—when in South Africa, he was subjected to racial discrimination, and he decided to bring about a change.  That committed choice of his and uncompromising resolve enabled him to inspire a huge freedom struggle that threw out the British Empire from India without the help of violence.

So, it is not only the choices we make, but also the commitment to these choices that enables us to make our life—either more degraded or wholly sublime, noble, and happier.  Let us start practicing from today—as we go through our day and night, to ponder over the options we have — “What could I think here?  What could I do here?”  Let us become more aware of the choices we are making and to think of how to choose better.  As we progress along, on the ninth day of the Happiness Challenge, we will talk about the secret formula for choosing more wisely.