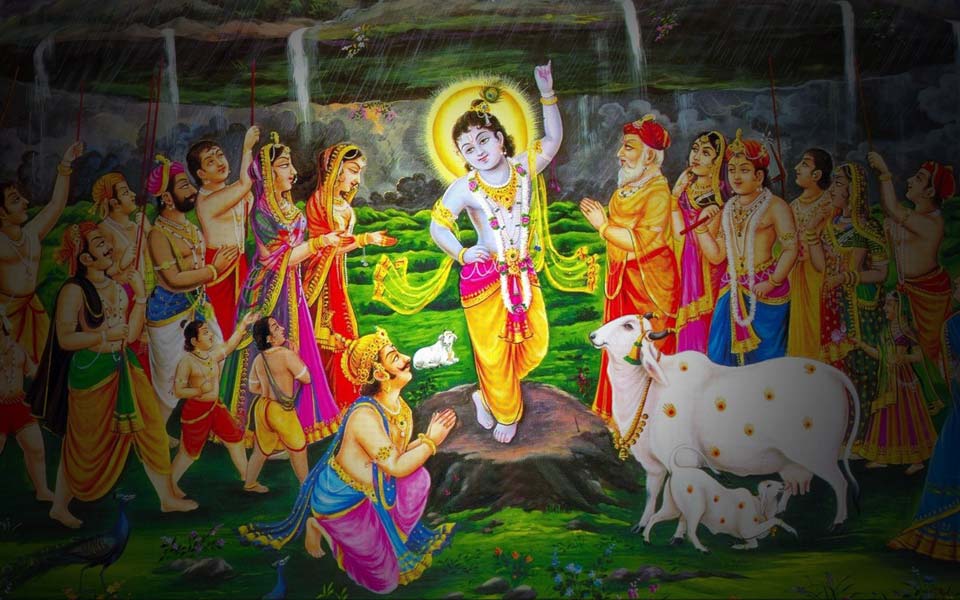 When Shree Krishna invited the Gopis by playing on His flute on a breathtaking backdrop of the rarest of the rare Sharat Poornima night, the Gopis, captivated by their Madhav’s venu-naad, irresistibly ran to meet their Beloved near the banks of river Yamuna in a dense forest. The Gopis pleaded with the Lord to bestow the divine essence of Rasa on them as was promised earlier. Prabhu smilingly acknowledges to keep His promise and begins the supremely glorious dance of Raasleela. Amidst the dance, when each Gopi had their Pranpriya-Vallab (Shree Krishna) for themselves, they developed a sense of self-esteem within themselves. That the Lord, Himself, was dancing with them, induced a sense of pride within their hearts. Noticing this, Shree Krishna disappeared into the jungle with Radhaji.

The acute, pain-stricken Gopis recount various incidents to remind Shree Krishna how He has protected them time and again from the faces of danger. Why did he not take their lives during those terrible times? Why did He save them every time they were confronted with fear and death? Dying seems easier at this moment than living a life devoid of Shree Krishna.

Shree Krishna invited Kaamdev, the god of desire, to witness the glorious Raasleela, and stupefied him with His exceptionally charming attractiveness. Shree Krishna’s grandeur and beauty outshone thousands of Kaamdevs put together. Hence, Shree Krishna is also invoked as Madan Mohan. When Kaailya naag, the five-headed serpent, was infusing poison into the river Yamuna, many sakhas began to fall ill. Kesava pacified the venomous snake and banished him from Vrindavan forever. From another perspective, Kaaliya naag also refers to the poison that is spread through the five senses from the material world. This poison is the root cause of vyadhi in this world. Shree Krishna, being kaam-vasana-nashak, the destroyer of worldly desires, protected the Brajwasis from getting dragged into the poisonous fangs of Kaliya.

In another incident, Aghasur, a demon disguised as a python, tricked Shree Krishna’s sakhas (friends) to perceive it as a cavern and engulfed them. The Lord began to increase His body size inside its stomach, the demon too continued to increase its size. Finally, the demon was unable to expand any further and suffocated to death. Thus Shree Krishna rescued his cowherd friends yet again as He did when Lord Indra initiated torrential rain in Braj out of egotistic anger. In this manner, the Gopis continue to remember another victorious incident of eliminating Trinavarta, the epitome of false ego; when their Gopal was very young. They also recall a memory from the future – of killing Aristasura and reminds Him that He has appeared on Mother Earth to protect His devotees from any evil that might befall them.

Thereafter the Gopis begin to pray to Shree Krishna as Rishabh, glorious of all men, to protect them and take care of them as He takes care of His cows.

It is important to draw our attention to the truth that the Gopis did not feel any material love for the world although it might apparently look so, they nurtured akaitab prem for their Priyatam (beloved). Material love is also known as kaitab prem as it binds a soul to the object of their love. On the other hand, Divine love is akaitab in nature, it frees a soul to higher transcendental levels of acquiring nearness with Shree Krishna. When a jeevatma (soul) loves any person or thing in this material world, it ultimately induces suffering. Hence during the death of a person, they feel an intense pain of separation from that object of love often feeling like 200 scorpions stinging at the same time! Conversely, the bhav (sentiment) that the Gopis contained for Bhagawan is exemplary of akaitab prem. When Gopi was ordered not to leave her palace in order to see Shree Krishna again, she responded to her mother saying – later do not accuse me of the condition you see me next time as I will leave this body to become that bumblebee you see buzzing around Shree Krishna’s vanmala (garland of wild flowers). Know that it is me! A bhakt is ever ready to leave their body to serve the Lord in the tat-sukh-sukhitvam bhav. Yet they continue to remain ever engrossed in the ever-expanding achintya anand of the Lord. This provides the slightest glimpse of the akitab prem that the Gopis realized for their Govinda.