Practice Seeing God in Every Entity 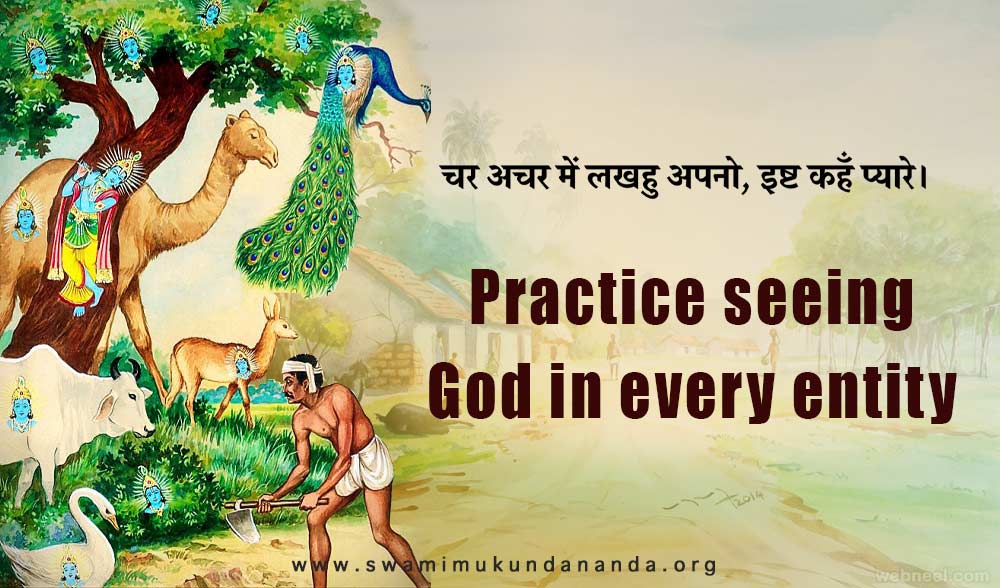 Continuing from the last month…

Shree Kripaluji Maharaj says that we must try to see God in every entity. If we begin to realize that God resides in every person then, there will be an end to the two biggest obstacles in devotion – raag and dvesh, attachment and hatred.  The two biggest hurdles in bhakti can be surpassed with Divine vision.  How would we have enmity towards someone if we see God in every entity?

Bheemsen had married a demoness called Hidamba. They had a son named – Ghatotkach.  Ghatotkach had a son and named him Barbarik. Barbarik was a very powerful person.  When the great Mahabharat war was about to begin, Barbarik showed his interest to go to battle.  When Shree Krishna saw that Barbarik was marching towards the battlefield, He realized that he had the capability to change the situation of the war. He decided to talk to him.  Shree Krishna asked him, “Where are you going?”  “To join the war”, replied Barbarik.  Shree Krishna then asked him what he can do.

Shree Kripaluji Maharaj further tells us how to make bhakti, devotion a part of our daily life.  We consider bhakti to be different and separate from our day to day life.  We think that we need to do devotion for half an hour and spend the rest of the day as we want.  Shree Maharajji says that this is not the right way to lead our lives.  We need to add devotion into our lives.  i.e., whatever we do in twenty-four hours should only be devotion.

This is explained by Shree Krishna:

There was a legendary and brave king in the history of India – Chatrapati Shivaji.  He was a spiritual person.  His Guru was Samarth Ramdas.  He used to roam around with his bowl for alms and the king was his follower.  Once, he was roaming in the capital of the kingdom of Chatrapati Shivaji with his bowl and begging for alms.  When Shivaji saw this, he got an idea.  He wrote a letter to his Guru that he would like to gift his kingdom to him, and placed that letter in his Guru’s bowl.  When Samarth Ramdas read this, he smiled.

Samarth Ramdas told Chatrapati Shivaji, “What will I do with this Kingdom?  I am a saint and my duty is to remember God and remind others to think of God.”  He told Shivaji that you are a king and it is your duty to rule the kingdom.  Now that you have given the kingdom to me, rule over it by thinking that it is your Guru’s, and not yours.

Similarly, we should lead our lives with the same thinking that whatever we have belongs to our Guru.  Whatever we do, it is for our Guru.  This way, our life will not be separate from bhakti.  Even if you possess a lot of wealth, think that it belongs to your Guru.  We should use only what is important and necessary for our body, and the rest we should dedicate to our Guru’s seva.  This is the way that we inculcate bhakti in our daily lives.  Shree Kripaluji Maharaj gives us a very powerful formula that is, to constantly think and remember Shree Krishna and your Guru with you always.  Whenever you begin some work, first realize the presence of God and Guru in front of you, and watching you.  Then begin your work; but after one hour, stop your work for a moment, and again realize that Hari-Guru are watching you.  Once you have practiced to do this in hourly intervals, then reduce the time to half-hour.  Then reduce the duration further to fifteen minutes.  In this way, with practice, we will reach the stage where we will always feel the presence of God and Guru with us.

Shri Aurobindo had also said, “Live always as if you are under the very eye of the Supreme soul and the Divine Mother.”