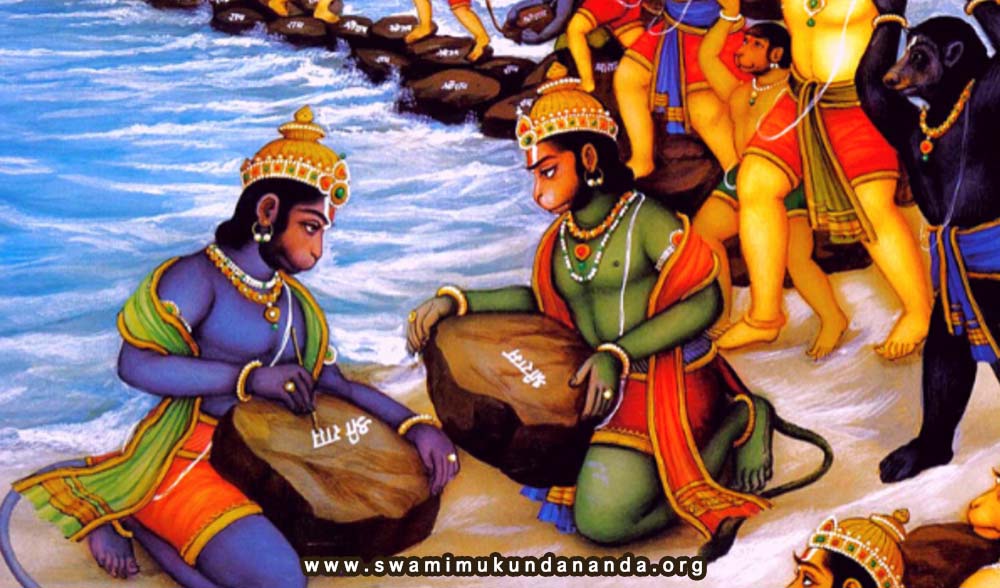 These are the next lines of the series “Sadhana Karu Pyare”.

In the preceding lines, Shree Kripaluji Maharaj has explained about meditating on God and the importance of applying our mind.   Shree Maharajji has repeated this again and again for the benefit of the sadhaks.  Because he knows that once said, people will not listen to it carefully.  If it is repeated again and again, the message will penetrate the mind slowly and gradually.  He knows very well that all individual souls are under the influence of maya, and nobody is like Arjun, who heard to Shree Krishna’s advice just once and said:

“My ignorance has been destroyed, and with Your Grace, I have gained true knowledge.” So, a Guru repeats the advice again and again.

All the spiritual masters have mentioned about the need for meditation or dhyan. Let us hear what saints have to say. “Just chant and remember the name of God”.

The Bhagavat says: “Chant God’s name unintentionally, or in humor or chant His name in anger. Just chant the name of God and its benefits will surely reach you”.
Tulsidas has also said:

“Remember the name of God with feelings or without any feelings, yet, you will be blessed in every possible way”.  Surprisingly, nobody has questioned these words saying, “We have chanted the name of God, but why have we not received any benefit?”

In the same vein, Kripaluji Maharaj questions, “You have been chanting your friend Ramgopal’s name, but you have not become a God-realized person!”

Some saints use the example of Ajamil.  They say, “He attained Divine abode by chanting ‘Narayan’, his son’s name.  You should also chant the name of God and reach Him.”  Saints also use another example – that of Saint Valmiki or Ratnakar as he was known before he became a saint.  He never chanted ‘Ram Ram’ as he could only say ‘Mara Mara’.

Now, if someone could attain God by merely saying ‘Mara Mara’, then what about the one who says ‘Ram Ram’?

Using these real-life examples, many saints have preached that one should chant the name of God at all times.  Jagadguru Shree Kripaluji Maharaj clarifies the real motive behind this message. Saints advise us to chant the name of God (with or without feelings) so that sadhaks can earnestly begin their spiritual journey in some form or the other.  It is like planting a seed.  If a Guru strictly instructs a beginner to apply his mind first and then chant the name of God, the aspirant may not be able to do so.  He may even discontinue his spiritual quest since his mind is not turned towards God fully.  Hence, to encourage and protect the sadhak’s aspirations, saints advise to start chanting irrespective of the feelings inside.

Another example we can consider is when parents bring their child to pay respects to a saint. They say “Son, bow down and prostrate in front of Swamiji.” The child starts to wonder, “Who is this Swamiji and why should I do pranaam?” The youngster does not understand the importance of this act and refuses.  The parent forces the child to bow down and offer pranaams, against his wishes.  When the child grows older, he will understand the significance and meaning of offering pranaam to a Swami.  Hence, in the preliminary stages, physical action is taught, and its importance is learnt with the passage of time.

Similarly, saints have taught and encouraged people to practice bhajans with the earnest hope that they will progress to the next level.  The secret behind this is revealed by Kripaluji Maharaj.  He clarifies that, when Ajamil’s example is used by saints, it does not mean that he just chanted ‘Narayan’ and attained Divine abode.

Before he became a saint, Ajamil was a highly capable personality. But he had strayed from his path of sadhana and turned away from God.  He later realized his mistakes and practiced bhakti in Haridwar (holy town in North India) for a year.

It is only after practicing devotion with complete absorption of the mind in God that he became a God-realized Saint.  He did not reach his goal merely by chanting ‘Narayan’.

Shree Maharajji again clarifies the essence of the message given by saints when they refer to Saint Valmiki or Ratnakar.  He chanted ‘Mara Mara’ because he was instructed by his Guru, Saint Narad who is the primordial acharya of bhakti. Naradji told him to chant ‘Mara Mara’ till he returns.  Ratnakar surrendered his mind and intellect to his Guru, and did exactly as his Guru wished.  He never questioned, “Guruji, when will you come back? What if you never return and I keep repeating ‘Mara Mara’? When will I have the vision of God?” No.  He never questioned his Guru.  He had complete faith in his Guru’s words and surrendered his mind to him.

Thousands of years passed; termites built a mound over his body.  He was completely covered in it and hence he got the name Valmiki, which means ‘termite’ in Sanskrit. With the Grace of his Guru, Ratnakar had a vision of God and became a God-realized Saint whom we all recognize by the name Valmiki.  So, it is our misunderstanding that by just saying ‘Mara Mara’, one can attain God.

The simple truth is that, wherever we attach our mind, we will attain that object. Jad Bharat, a paramahans, was reborn as a deer in his next life because of his deep affection for a fawn in his ashram.  It is a false assumption that we could loath our lives away, and at the time of death, just chant ‘Ram Ram’ to attain God’s Divine abode.  The main question is – Did we chant God’s name with our mind involved in it? Did we remember God in our heart and feel His presence?  This is the reason Shree Kripaluji Maharaj lays emphasis on meditating with the mind and reminds us that the very life and essence of sadhana is ‘Roop-dhyan’.

Very informative article . I love all the videos,articles, bhajans and online classes of jk yog. I feel more closer to God now & I experience peace. Thank you Krishna & Swami ji for your grace.