Belief in God is not a natural process that we as human beings just follow. We have to exercise our free will and actively make a decision to have faith in God.

Nav:Home/blog/spirituality/Gopi Geet Episode 1 – Who are the Gopis 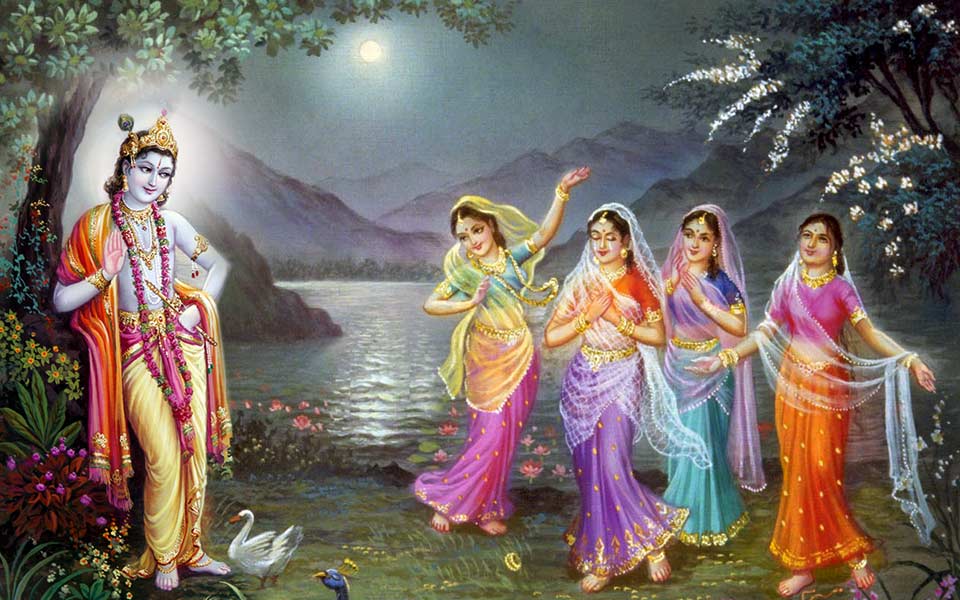 The highlight of Shrimad Bhagavatam Puran

Shrimad Bhagavatam was written by the sage Ved Vyas (also the author of the magnum opus of Hinduism, the Mahabharat) and narrated by Shukadev to King Parikshit. The Gopi Geet (i.e. Songs of Gopi describing the love of Gopis for the Lord) which are a part of Shrimad Bhagavatam, are written in Kanak Manjari Chand. Kanak Manjari means the “intoxicating seed of the Dhatura plant”. The elegancy of love, where one worships God as one’s Soul beloved (Madhurya bhav) has found expression in the Gopi Geet, due to which it has an intoxicating effect on the listener.

Why should one read Shrimad Bhagavatam?

Within the 10th Canto of the Shrimad Bhagavatam, the Rasa Panchadhyayi is illustrated in five chapters : 29th to 33rd chapter. These chapters are considered as the five pranas of the Shrimad Bhagavatam and hold the same significance as that of the five pranas—prana, apana, vyana, udana, samana, i.e. the vital breaths in a human being. Gopi Geet has been elaborated in the first 19 verses of the 29th Chapter.

If the greatest of all scriptures – The Shrimad Bhagavatam, is a divine structure, a living organism, then the Raas Panchadhyayi, is considered as the pran, or the vital breath, of the whole scripture and the Gopi Geet is the crest jewel in the crown of the Lord himself.

We are all travelers on the path of happiness. This happiness can only be found through Devotion. Hence, if you aim to improve your life, you have to make an exalted personage your ideal and follow their footsteps to reach your divine destination, i.e. to get the grace of the Lord and be one with him.

For travelling on the path of Devotion, there is no one higher to follow than the divine Gopis, in order to reach our destination.

The Gopis are divine beings about whom Brahma ji said in Vrihad Vaman Puran, “I have done 60,000 years of devotional penance to obtain the dust of the Gopis’ feet but I have failed”. Uddhav ji wished to become a blade of grass in the land of Braj, so that He would be eligible to receive the dust of the divine feet of the Gopis (charan raj). Narad ji in His Bhakti Darshan Sutras says, “If anyone wants to see the true embodiment of Bhakti which I have described in my Sutra, one only has to look towards the Gopis of Braj”. It is this Bhakti Bhav (outpouring of devotion) that we see in Gopi Geet. These verses are the Gopis’ own words and sentiments which brings the listener to an ecstasy of devotion!

Meanings of the word “Gopi”

Like in many other languages, in Sanskrit also, a single word can have myriad meanings. Hence exploration of the origin of the word “Gopi” has led to multiple meanings.

One such explanation comes from a similar word “gopniya” or hidden. “Gopi” is someone who keeps her love hidden. Like the beautiful flame in a lamp that burns brightly surrounded by the four walls of a house and gets extinguished by winds if taken out, similarly Gopis are the illumined ones who keep their divine love towards Lord Krishna, hidden. Lord Krishna himself escaped from the prisons of Mathura and hid Himself in Braj from Kamsa. Gopis, being fully versed in the art of devotion, are aware of the greatness of the Lord and yet keep Him hidden to serve Him in His divine pastimes, alongside hiding their immense love for him.

Another possible origin of the word Gopi comes from an old Sanskrit verse “Gobhihi Indriyani Vibhanti Krishna Ras, iti Gopihi”. i.e. The one who savors the Ras of Shri Krishna with one’s senses, is a Gopi.

The Gopis walk on the path of spirituality which holds the personal form of the Lord as the highest, and on this path are Nirakar Bhakts as well, who worship God as formless. These formless worshippers are unable to savor the Ras or nectar of God, nor any Leelas (divine pastimes). The worshippers of the formless cannot see the Divine Lord or hear the sweet sounds of his flute. Neither do they get the pleasure of touching his lotus feet nor smell his sweet fragrance. The Gopis, on the other hand, savor this nectar or Ras of the Lord through all their senses. Like the rasagulla that absorbs all the sweetness when soaked in syrup, the Gopis absorb the divine nectar of the Lord through every pore of their skin. Tetriya Upanishad describes Shri Krishna as pure Ras but only a very few get a full taste of this nectar. The Gopis are able to savor the full taste of this divine nectar due to their absolute and pure devotion.

God says that He bestows His divine grace according to the extent of the devotee’s love and surrender. If you are engrossed in the world and worship the Lord with only 25% attachment, then it is the same proportion of Ras that you would receive from the Lord. As a soul increases its love towards the Lord, the more it will experience the divinity of the Lord as well. The Gopis are actually an ocean of unconditional love and devotion – the depth of which, cannot be fathomed through our limited senses. We can only imagine a tiny fraction of that divine love.

Yet another definition of Gopi comes from the Sanskrit verse “Gah Panti Iti Gopiyah”, i.e. one who can control all of their senses is a Gopi.

To love God is the essence of all devotional practices. Hence, read on more, to nourish your mind with the sweetest loving compositions of the exalted, ultimate and perfect devotees of the Lord – the Divine Gopis!

Technology for Mind Management In the physical realm of life, all our endeavours are directed towards ...